Three in One Consoles 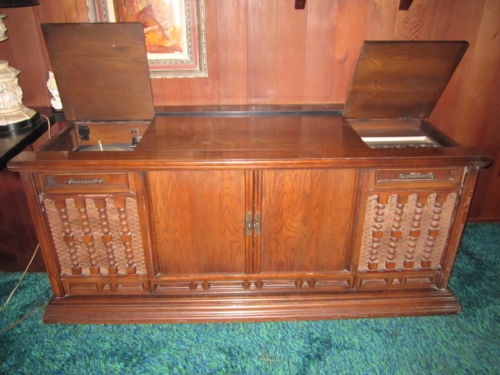 Vintage Curtis Mathes Three-in-One Console, featuring a working AM/FM radio, a functioning turntable (though you'll have to be a little savvy to fix the automatic mechanical arm, which periodically picks back up off the record) that can play at three speeds, two built-in speakers that work at set volumes (though they crackle when you move between volumes), and a vintage TV (not the original) that fits inside and behind the wooden sliding doors. The furniture itself is in good condition. The left and right sides of the console hinge up to reveal the record player and radio, and the front has two panels that slide open to reveal a TV, but when they're down, and closed, you'd have no idea any electronics were in there. Bought in 1969, this is a true vintage item. The console is 70' long x 29' tall x 23' deep.